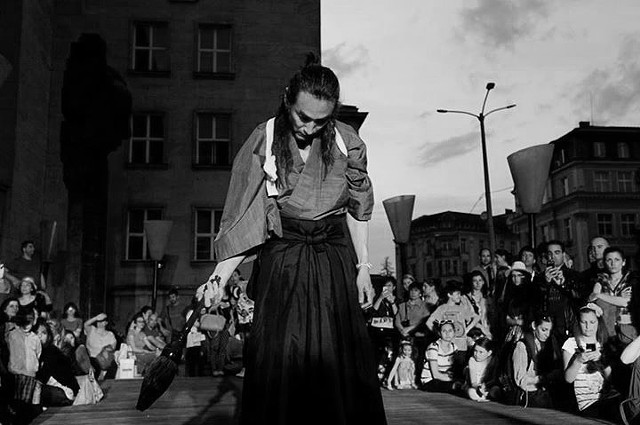 Kihachiro Nishiura was born in 1970 in Tokyo to a highly acclaimed ceramics family that has produced Nishiura-yaki style porcelain since 1806. He remains devoted to continuing the mission of his ancestors through his practice of calligraphy, flower arrangement, and spatial installation art. Engaging in a variety of forms in which to express his philosophy, he aims to create a synthesis between the tradition of harmony in Japan and new outlooks from abroad. He received his Masters of Geophysics from Ohio University. More recently, he established his own school of cultural arts, Nishiura Style. Nishiura Style is a school of teaching based on his unique philosophy of nature influenced by Eki, the traditional philosophy of the universe. Since 2004, he has been exhibiting and demonstrating his calligraphy, incense ceremonies, flower arrangements, and art installations in Japan, the United States, and Europe. He is currently the director of a non-profit organization, Tsukino Akari, which provides Japanese cultural experiences for children and the general public outside of Japan. In addition, he currently heads Nishiura Ryokusuido, dealing in fine art and antiques. Art practice Calligraphy, the way of the brush: -Both traditional and new innovative methods on canvas, paper, and ceramics. -Demonstrations and lectures on brushwork and calligraphy. Flower Arrangement Art, Ikebana: -Both the teachings of traditional schools and new schools. -Demonstrations on flower arrangement. Incense Ceremony: -Demonstrations and workshops. -Wabi-style of Incense ceremony based on the philosophy of nature. Tea Ceremony: -Demonstrations and workshops with an emphasis on the spiritual aspects and techniques from the Omotesenke School of Tea.

Other Activities: -Designing commercial products and calligraphy for commercial purposes. -Producing, consulting, and coordinating Fine Art and Cultural Events. -Volunteering to teach traditional Ikebana and calligraphy to children. -Studying and researching “Eki” traditional philosophy of the universe and spirituality of Art & Culture.